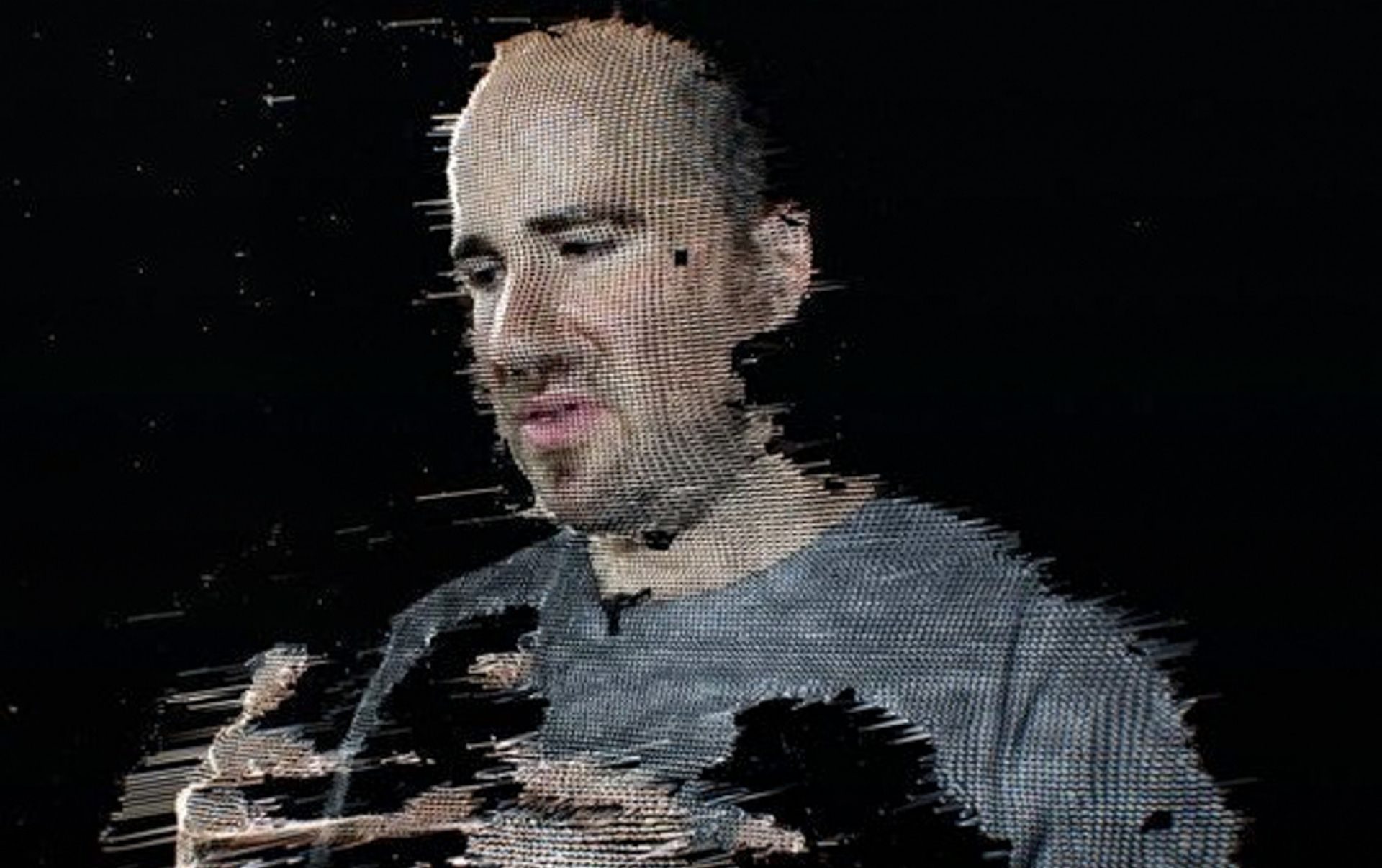 Zach Lieberman is an artist, researcher and educator with a simple goal: he wants to surprise viewers. He is a pioneer in creative coding and a poetic computer scientist. Zach’s creative practice and the ARTECHOUSE mission to inspire, educate and empower overlap in many ways: Zach is not only an artist, but also an educator and a collaborator. Collaboration and co-creation is at the heart of the work we do at ARTECHOUSE.

Future Sketches at ARTECHOUSE DC was the first solo exhibition of Lieberman’s work in the city and invited visitors to experience code like never before, opening their minds to imagine the possibilities of creative uses of technology.

Lieberman, originally from outside of Chicago, creates performances and installations that take human gesture as input and amplify them in different ways — making drawings come to life, imagining what a voice might look like if we could see it, transforming people’s silhouettes into music.

As an educator, Lieberman is especially interested in sharing information, creating more tools and expanding the wealth of knowledge available to others.

He writes his own software to create his artwork, and is a co-creator of openFrameworks, an open source C++ toolkit for creative coding. OpenFrameworks brings together several libraries that are commonly-used by software developers.

In 2013, he helped to create the School for Poetic Computation in New York City, a low-cost, alternative school with sessions up to 10 weeks long where students can find a mixture of an artist residency and an intensive seminar. SFPC explores how electricity, code and theory can be used to make poetry. He was also recently appointed as an adjunct associate professor of media arts and sciences at the MIT Media Lab.

“Technology should always be in service of the idea. The idea should be something that is poetic or that tells us about what it means to be human. When I create work, I don’t want people to point at it and say, ‘That’s dope software.’ I want them to say, ‘That’s a beautiful idea.’”

Lieberman is also co-founder of the interaction design company YesYesNo, a collective that specializes in the creation of engaging, magical installations that combine creativity, artistic vision and cutting edge R&D. YesYesNo aims to develop work that puts creativity and awe at the forefront of interactive media. They have worked with companies like The New York Times, Google, Microsoft and more. Fun fact: Daito Manabe, responsible for Lucid Motion which was shown at ARTECHOUSE DC in the fall of 2019, is an associate at YesYesNo.

Lieberman has been listed as one of Fast Company’s Most Creative People and his projects have won numerous awards, including being included in Time Magazine’s Best Inventions of the Year.

Lieberman holds a B.A. in Fine Arts from Hunter College and both a B.F.A. and M.F.A. in Design and Technology from Parsons School of Design. He has been artist-in-residence at Ars Electronica Futurelab, Eyebeam, Dance Theater Workshop and the Hangar Center for the Arts in Barcelona.

When Lieberman graduated from college, he got a job in online designing where he had to bluff his way through his tasks, learning from books as he went. He eventually discovered different animation softwares: “I discovered Flash and ActionScript. There were things people were doing with animation online and the moment I started to play with that, I was immediately hooked. I always loved animation, but I didn’t know how to do it. Here was this system where you could write a line of code and make something move across the screen. I fell in love with that.”

Future Sketches playfully explored the future and how technological play can help us see possibilities for that future. Itt featured numerous installations exploring the creative capacities of code: Daily Sketches, Manual Input Sessions, Re-Coded, Body Sketches, Reflection Studies, Expression Mirror, Average Face Mirror, Face and Más Que la Cara, as well as a number of AR filters for visitors to explore. It also featured a couple pieces featuring work from Lieberman’s students. This exhibit marked the first time that Lieberman saw his work all together, laid out in a more linear way.

The name “Future Sketches” is a reference to his new group at the MIT Media Lab of the same name. This group explores software as a medium for art and design. There is a focus on engaging with the past as a way to imagine possible futures, as well as on creating tools that allow for creative coding. “Sketches” refers to Lieberman’s practice of creating new, small works every day that he may further revisit or develop.

An important idea in this exhibit is iteration- how the artistic ideas are formed, reworked and refined over time. In his series of daily code-based “sketches” that began on January 1, 2016, Lieberman creates something new every day to explore the different possibilities in creative coding and see what can be examined on a deeper level.

“I really appreciate ARTECHOUSE because they have pushed me to show so many projects and really pushed the limits of what I would consider possible. It’s a really magical space to be able to show a lot of different types of work in one venue.”

While Lieberman is the driving force and main artist responsible for this exhibit, a number of featured installations are the result of collaboration with other artists and work from his students. He feels strongly about sharing ideas and resources, so this inclusion of a number of collaborative pieces reflects his larger desire to educate and assist other artists and creators.

The pieces Average Face Mirror and Face were created by Sarah Howorka and Robby Kraft, respectively, both students from the School for Poetic Computation. The installation Re-Coded features sketches by students of the school as they explored how past computer-based works could be reworked and reintroduced to the public, reflecting of his interest in sharing work. These installations are the result of work created for classes led by Lieberman, where he helped them consider the possibilities of coding and artistic uses of technology.

A number of installations are collaborations between Lieberman and other creators. Manual Input Sessions was created by the TMEMA, a group encompassing Lieberman and Golan Levin. Levin was one of Lieberman’s professors at Parsons, so this exhibit features the work and influences of three generations of students, teachers and artists. The artist and educator Molmol Kuo worked with Lieberman on the pieces Body Sketches and Más Que la Cara (which had additional contributions from Gordy Cherny and Matthias Dörfelt).

Additionally, the main space’s Sketch Lab features the musical pieces “Exitisim – (A)” and “Particle and Fields” by the electronic music composer Jemapur, “What I Feel” by Daito Manabe (of our Lucid Motion exhibit) and improvised music created for this exhibit by pianist Nahre Sol. Manabe also created the track that can be heard in the Face Lab. These are musicians whose music Lieberman enjoys and who, in some cases, have collaborated with him in the past (Daito Manabe).

OpenFrameworks is a collaborative, cross-platform tool for creative coding. First released in August 2005, it “thrives on the contributions of many people, who engage in frequent discussion, and collaborate on addons and projects. We encourage people to make openFrameworks their own, and contribute to the ecosystem.”

“We want openFrameworks to be as simple as possible, especially for folks coming from other [coding] languages and environments. C++ is a ‘large’ language, large in the sense that you can write very different types of C++ code. If you go to the bookstore, you’ll see hundreds of C++ books. We want to create a library where you don’t need to be an expert [as] the patterns, approaches and style of the code is simple and intuitive.”-openFrameworks website

The main audience is people using computers for creative, artistic expression, who are looking for deep access to the data inside of media in order to manipulate, analyze and explore. By creating this tool, and freely sharing it with the world Lieberman enabled thousands of creatives to explore creative coding and revolutionize the industry, opening the doors for collaboration, innovation and creation.